With the script done we held the joint audition of our characters Martin and Douglas.  We were joined by our (now cast) actors Daniel Ableson and Robin Holden. 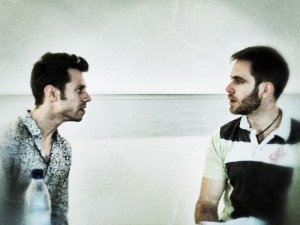 Douglas and Martin face off in the rehearsal

Two read throughs of the script in it’s entirety went very well and made it clear to us just how well this can work on screen- and besides that how much fun it’s going to be to watch! It’s the weirdest thing about writing a script; when you put the words down on the page they’re very much in your own voice or your perceived interpretation of the character you are trying to write. When those words actually come from someone portraying your character it makes the whole thing feel alive, and thats just what Daniel and Robin did.

Myself Rob and Dele were on hand to laugh along and give pointers where needed. We found ourselves very encouraged by the performance, and this is only the first time the actors had met. Over the coming weeks there are to be more rehearsals and there are even plans to film a rough version of the film to test out its visual effects…oh didn’t i mention that before. There are visual effects. There, you’ve been told

Don’t forget to donate to the production of “REP 5091″ The independent short film by a bunch of Londoners to get access to the behind the scenes featurettes on the lead up to the films release!