As we draw ever closer to having to film REP 5091 its time to rehearse the ever loving be-jebus out of the script.

Once again congregating at our usual hot spot in London town to put the film through it’s paces, Dan and Robin took to their rolls of Martin and Douglas. It’s always a good sign when the people who’ve spent the most time with the script (Namely Myself, Rob and Dele) can end up laughing at the performance laid on before them. Hopefully that bodes well for people who haven’t seen anything of the film to find it funny, fingers crossed eh? Armed with plastic cups as props for fine china and a Hard drive box in place of a briefcase we really spared no expense in giving our actors the tools they need to work with. 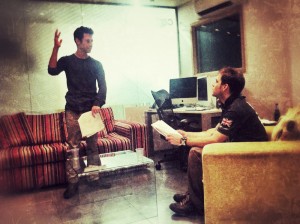 As well as rehearsing the entire film…twice, we had time to film a few little bits for a promotional video coming to your face soon. A test shoot for one of our visual FX shots was also put in the can which will be shipped off to our CG mistro next week to see how we’re going to we’ve our magic for the real thing and make the ridiculous look quite realistic. More about that shortly…and by shortly I mean at least before 2013.