As is the trend with many a film these days; REP 5091 has a few visual effects dotted in it. To make it easy on ourselves we shot some of the stuff against a very pleasing green hue. 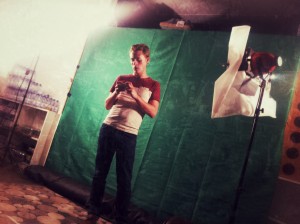 Director Smith takes out time to send a text while we try to shoot…would have been nice if he’s stepped off the set so we could get on with it.

A few weeks after the main shoot wrapped, a keen (although drastically reduced) B crew re convened on set to pick up a section of the script that was all visual effects. Shooting against green can be tough as the actors have no idea what will be in the background and therefore can’t use it as a real environment to act in. Like in Star Wars when they film everyone on blue and just say- “There’s gonna be some sort of giant monster in the background, look worried!” Luckily this wasn’t a problem for us- as you will see in the finished film!

Dan picked up his roll as the REP as if he’s never been away and blasted out his lines for a few hours at the camera and a blur of heat and lights. We even had the honour of being joined by “ole’ Smokey” on this shoot. Old smokey is a red head light that mysteriously started smoking after about an hour of being on. He didn’t stop us though as all it took was a quick five minuets of down time- a good flapping from the clapper board and he was good as new.

Look out for news on the final shoots- coming at the end of september!